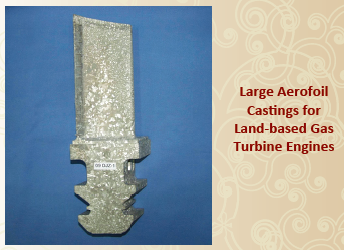 DMRL’s expertise in investment casting technology has also resulted in a civilian spin-off for the manufacture of large size blades used in land-based turbines for power generation (BHEL and NTPC). NTPC is operating several gas-based power plants in the country and the blades for gas turbine engines are being imported at high cost to replace the worn/damaged blades during the overhauling. With the help of CAD model, a wax pattern injection die has been designed and fabricated. It was quite challenging to produce a class-I casting since the individual blade is heavier (3 kg) than the Kaveri aero-engine blade (200-300 g) produced so far. However, with existing expertise of developing aero-engine blades, technical difficulties were overcome through optimisation of process parameters. One engine set, consisting of 125 numbers of IN738 alloy blades, was produced with an acceptable yield of 60 per cent and handed over to NTPC. This is an outstanding example of civilian spin-off benefit of the technology developed for defence.

DMRL has developed the process technology for making highly intricate, aerofoil shaped, sintered silica cores used for the production of hollow gas turbine engine components. This is one of the critical material processing technologies in the gas turbine engine development programme. Through sustained research and development efforts, a viable process based on Ceramic Injection Moulding (CIM) has been successfully developed. The capability of the process has been demonstrated by making highly complex and intricate ceramic cores meeting stringent dimensional requirements. The process is used for making silica cores for production of turbine blades and vanes of Kaveri engine and land-based gas turbine. The process is also being adopted for preparing alumina cores required for producing single crystal aerofoil castings.