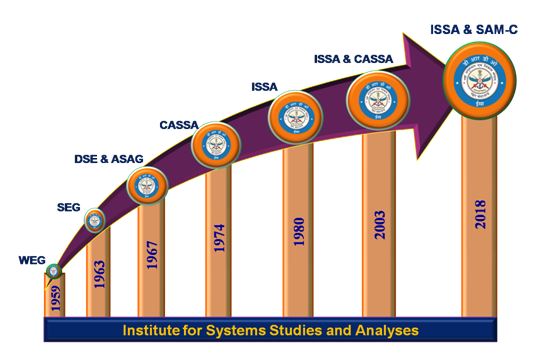 The idea to apply Operational Research (OR) and Systems Analysis techniques in the Indian defence environment was conceived as early as the year 1959. A small group called Weapon Systems Analysis Group (WEG) was created to carry out Operational Research and Cost-effectiveness studies for weapons and equipment for the three Services, inter-service Organizations and the Ministry of Defence.

With the diversification of activities, WEG was renamed as Scientific Evaluation Group (SEG) in the year 1963 and later in the year 1968, SEG became a full-fledged Directorate named as Directorate of Scientific Evaluation (DSE). The Directorate continued to provide consultancy services to Services HQrs, SA to RM, DRDO HQrs and the Ministry of Defence in the fields of strategic defence planning and analysis, weapons evaluation, damage assessment, performance evaluation and OR applications, etc. During this period, a large number of systems analysis studies were carried out. The results and recommendations of these studies contributed in the top level decision making process.

Consequent to the reorganization of the system analysis activities within DRDO, the functions of DSE were redefined and was given the present name, i.e. Institute for Systems Studies & Analyses (ISSA) in the year 1980. In the year 1972, a small group named as Aeronautical Systems Analysis Group (ASAG) was created with an objective to carry out aeronautical systems studies and analyses. This group was functioning from National Aeronautics Laboratory, Bangalore as a detachment of the Directorate of Aeronautics. In the year 1974, ASAG was converted into a self-accounting full-fledged unit named as Centre for Aeronautical Systems Studies & Analyses (CASSA) and was shifted to the premises of Aeronautical Development Establishment, Bangalore. From 1974 to 2003 ,CASSA contributed significantly to a series of systems analysis studies attributed to DRDO HQrs and the Indian Air Force. It contributed into several design and development activities and policy level issues with its objective analyses.

In the year 2003, CASSA was merged with ISSA with an objective to synergies systems analysis activities and wargaming development processes under integrated combat environment. With this, ISSA has emerged as a nodal systems analyses lab and in 2013 ISSA is placed under SAM Cluster with the mandate in the field of Training & Planning Wargames, Integrated Air Defence & EW, Combat Modeling, Simulation System Analysis and computerised Wargame