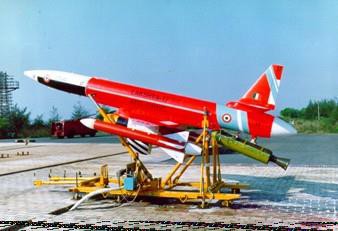 Lakshya is a cost effective re-usable high subsonic aerial target system powered by a gas turbine engine and launched either from land or ship. It carries two tow targets of tow lengths of 1.5 km each having radar, IR or visual signature augmentation and Miss Distance Indication Scoring System. These tow targets are used for training of land or ship based gun and missile crew and combat aircraft pilots in weapon engagement. The Lakshya was inducted into the Indian Air Force, Indian Navy and Indian Army in 2000, 2001 and 2003 respectively.